Rokko housing is one hell of a project and only an architect like Ando could have designed this magnificent structure. 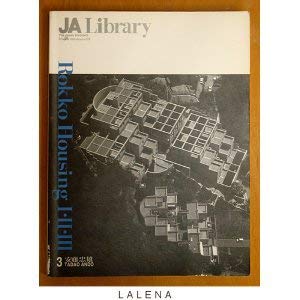 The site is a south-facing hillside with a 6o-degree slope in the foothills of the Rokko Mountains in Kobe. Architect Tadao Ando took on the challenge offered by the site with great determination.

This complex, which clings to the side of a hill like a rock-climber, is unique in appearance and a masterpiece of architecture in Japan. The project was risky from the standpoint of technology, laws and regulations, and economics.

The building could not have been designed by anyone other than Ando. Shown the original hillside, who else would have had the madcap idea of constructing an apartment budding on this incline after they had seen it?

The first phase was begun in 1978 and completed in 1983. Two years after its completion, Ando published the second phase for an apartment complex four times the size of the first phase.

After nearly eight years, the second phase was completed, whereupon he immediately embarked on a third. That was completed in 1999.

Architect Ando has continued building in this area for 3o years, as if determined to cover the entire hillside with his buildings.

He has overseen the development of this cluster of apartment buildings in great detail, even taking the time to occasionally water plants himself. He has a unit of his own here.

The first-phase complex is a three-dimensional grid, based on a unit 5.4 meters by 4.8 meters in plan, following the slope. The 20 apartment units step back on the hillside, using the roofs of lower levels as terraces; the result is a cluster of independent units, each with its own character.

Greenery penetrates the interiors of the building, enabling the occupants to lead lives at one with nature. The idea of the roof terrace has often been used in subsequent projects by Tadao.

The second-phase complex is next to the first phase, but the two projects are independent of one another. A square module, 17 feet by 17 feet in plan, was used in the second phase; the vertical overlapping of square grids has created unexpected views.

Three types of gardens are provided in order to generate various communal relationships: the terraces that serve as the front gardens of individual units; a middle courtyard that serves as a plaza where people gather; and the rear garden, a stroll path where seasonal flowers bloom in profusion. These three gardens are respectively private, communal and public in nature.

They are places for different types of communication that can enliven everyday life: the terrace provides a view of the harbour and a nightscape of Kobe; the middle courtyard is a place for a brief chat among neighbors; the path is a place where a resident can stroll alone to appreciate the effects of the changing season on the landscape.

The third phase is a large project, approximately seven times the size of the second phase. Here, Ando sought to lower the cost by introducing prefabrication.

Besides low-rise buildings with courtyards, there are, for the first time, high-rise buildings. As in the earlier two phases, the spaces between buildings are designed as common spaces, but in the third phase, the stepped path in the north-south direction following the slope of the site and green areas that extend in the east-west direction criss-cross in plazas.

The common spaces are highly nuanced and remind one of the Halen Housing Project (1 955-1961) near Bern, Switzerland, by Atelier 5.

The three phases are actually three development projects for different clients on different sites, carried out at different times. Ando’s ability to endow the three projects with a harmonious, continuous townscape commands admiration.

He has analysed the relationship between individual elements and the group, and has translated the principles for combining units in a housing complex into clear rules of spatial composition.

People can face each other, look out in the same direction or stand back to back. It should be noted that the prototypes for these forms of spatial organization, based on human relationships, correspond to Ando’s Row House in Sumiyoshi, the Koshino House and the Kidosaki House.

Ando is a diligent student; in his youth he did research to see how the neighborhood-unit theory or the idea of the Unite d’habitation could be adopted in Japan.

The Kingohusene Housing Project (1957-1960) near Helsingor by Jorn Utzon and Sohoim Terraced Housing (1950) near Copenhagen by Arne Jacobsen are among his favourite residential projects.

Moreover, three factors—rules of spatial organization that apply to the entire complex, highly individualistic interior spaces, and shared spaces that make full use of the advantages of being a group rise to the ambience of a quiet, high-class residential district.